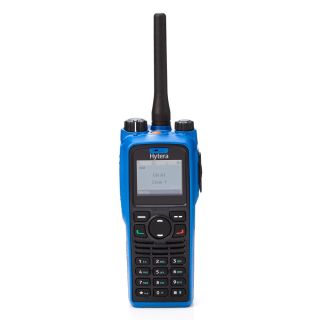 Improved PCB Circuit Layout & EMC Shielding
To achieve such a high safety standard, Hytera PD79X Ex adopts optimized distributed line design on PCB, minimizing the odds of circuit fault. All the key components on the PCB are covered with shield, and the space between lines, between components, between component and shield are properly spaced , which translates to better EMC performance and less internal interference.

Innovative Silicone Encapsulating
Silicone encapsulant technology prevents the internal circuits from interface with air and liquid which effectively stops the intrusion of liquid, dust and harmful gas. The silicone encapsulating process is delicate and complicated. As a result, every single PD79X Ex radio spends eight hours in the manufacture line.

IP67 (non-explosion-proof)
The Ingress Protection reaches IP67 (6: Totally protected against dust; 7: Protected against the effects of immersion up to 1m for 30 minutes). It´s the highest IP level for land-based wireless radio application.

Patented Battery Latch
To disengage the battery from Hytera digital portаbles, the lock and bolt of the latch need to be moved along two different axes. Such a patented design ensures no disengagement of the battery pack from the main radio in case of dropping that might cause spark.

ATEX is the European Union directive to which all two-way radios must conform if used in potentially explosive environments. It replaces the Cenelec classification in all European Union member states and EFTA countries.

IECEx Scheme is the future route to global compliance certification. Its aim is to harmonize standards to allow free movement of goods by establishing a world-wide accepted standard.

Chemical Industry
Flammable gases, liquids and solids are converted and processed in many different processes in the chemical industry. These processes may give rise to explosive mixtures.

Power Generating Companies
Lump coal, which is not explosive in mixture with air, may be converted in the conveying, grinding and drying processes into coal dusts capable of forming explosive dust/air mixtures.

Mining
The by-product of coal mining is gas. Following the coal exploiting, the gas will gather under the ground. If not in good security management, gas in coal mine can lead to serious gas explosion.

Pharmaceutical Industry
Alcohols are often used as solvents in the production of pharmaceuticals. Agents and auxiliary materials that give rise to dust explosions, such as lactose, may also be used.